Decades of Changes: Art History At A Glance

Decades of Changes: Art History At A Glance ‘May You Live In Interesting Times’ the Chinese saying goes.The proverb was chosen as a title to the 58th Venice Biennale curated by Ralph Rugoff and most likely not by chance. The history of Art has always been a battlefield for those who shared traditional views on painting (whatever they were at that period) and craved innovation. The battle went on with varying success, however, revolutionists were a bit ahead all the time, even without having realized it. Thanks to their tireless attempts, Art develops and we keep discovering new talents and admiring their creativity.

The history of Art has its own rules, since we wouldn’t call it ‘history’, if major events of the field had not been closely interlinked. At first glance, some art movements seem to be as little matching as a good cappuccino and expired creams, however, this is not to say that bridges can’t be built between them. Just find a point of contact and you will see the whole chain of Art history shining like Christmas lights. It’s unlikely to discuss all the examples in an article which is couple-page-long, still, it’s not an excuse for me not to give it a try. First, how it turned out that realistic painting stopped ruling the art world? (To be more precise, why it suddenly became no longer the only possible way to represent things on canvas). Remember Plato said: ‘There are three arts which are concerned with all things: one which uses, another which makes, and a third which imitates them.’ It might be nice to think that the philosopher meant to show the multiplicity of Art is a phenomenon, but no — the first two criteria referred to other things, such as reign and crafts. According to Plato, Art has initially imitating function (let alone it being put in last place). Thus, Art is implied to represent objective reality: the more plausible it does, the higher that particular work of art is ranked.

This formula may be deemed for the upcoming dozens of centuries. It was counted as a target, though its’ interpretation was slowly changing. For instance, Romanesque painting (XI – XIII century AD) was strict and concise and mainly focused on the general ratio of the subject, not on humans (still, there were a lot of them represented in a crowd or as a part of the community). The reality of Art of that period was coherence of the social fabric, church’s commitment and insignificance of human nature in front of the creator, which was a typical vision for Europe in the High Middle Ages. One can’t say the same about the values of the Renaissance period (circa ХIV – XVI century AD). Political and economical changes in the society, development of the humanist thought affected the way people expected and desired to see reality depicted by painters. Improvement of the artistic techniques — elaboration of chiaroscuro, volume and perspective of the drawing — combined with an increased interest in human being and its body structure made a painting look even more realistic! Not without a reason, Italian representatives of the Renaissance and the successive Flemish Baroque painters are widely accepted as the most accomplished artists ever. Just take a look at the masterpieces by Pieter Paul Rubens, Antoon Van Dyck, Jacob Jordans — they are gorgeous, sublime and really life-like.

We might say, a bit too devoted to divine matters, but why not to change the topic for what’s relevant today, preserving the technique? Literally, it would be perfect art. No such luck: here come the Impressionists.

If you ask someone (let it be yourself), where contemporary art started, the answer would be probably: I am not sure. However, there are just a few response options and ‘Impressionists gave it a push’ is one of them. Works that look picturesque and charming and pretty ‘normal’ for today’s viewers, used to cause outrage among noble French audience 150 years ago.
The painters we call ‘the Impressionists’ without thinking, gained this name through the review by their contemporary, famous critic Louis Leroy. Leroy visited the first exhibition by the so-called Anonymous Society of Painters, Sculptors, Printmakers (1874), who, in fact, carried on the Salon des Refusés mission — exhibited paintings rejected by the Paris Salon. In his review on the show Leroy called it L’Exposition des impressionnistes, which was meant to sound sharply and satirically — the observer criticized the artists’ manner which was careless and, per se, not realistic: ‘A preliminary drawing for a wallpaper pattern is more finished than this seascape’ — wrote the critic about Monet’s painting ‘Impression: soleil levant’. The thing is the Impressionists didn’t really care either about the plausibility of the image or the conformity with the Salon expectations. Instead, they wanted to assert themselves as artists who are capable of deciding upon the artistic manner and the subject of the works. As we can see, the category of the Impressionists has accidental nature, so are the ‘members’ of the movement.
Painters who took part in the above-mentioned exhibition at the 35 Boulevard des Capucines are usually referred to as the Impressionists. Among them are Claude Monet, Alfred Sisley, Pierre-Auguste Renoir, Camille Pissarro, Berthe Morisot, Edgar Degas and some others. Still, what about the artists who inspired the subsequent group activities but didn’t join them further? Édouard Manet und James Abbott McNeill Whistler are great example of that. The scandalous ‘Luncheon on the grass’ by Manet and decent ‘Symphony in White’ by Whistler attracted varied reactions at the Salon de Refusés (1863), and yet both of them contributed greatly to the establishment of new movement, though they never considered themselves as the Impressionists.

But the predecessors of Impressionism couldn’t sink in the dustbin of history without taking roots — there might have been something before them. And wait, we were talking about the wonderful Renaissance period a few paragraphs above, when those cocky Impressionists arose. What is the link?

As wonderful as the Renaissance was, it couldn’t have lasted forever, because the time changed. It was replaced by Baroque in the XVII century which was marked by the dramatic, relative dynamism of the plot and colour saturation (check the paintings by Rembrandt, Rubens, Poussin, Vermeer and Velázquez to make sure of that). Further came Classicism (XVII – XIX) that decisively put water in Baroque’s wine, embodying the ideas of the Age of Enlightenment. Classiсism paintings tend to have a better-balanced composition, pay more attention to corporeal proportions and keep the essential framework. Despite the respect for the humanist ideals, Classicism doesn’t sing the beauty of man’s nature and the body, since the reality had shifted again — social and public values were deemed to be more important than personal interests. In a way, classic art reclaimed the antique ideals, asserting the conciseness of Romanesque paintings. Modesty, poise and rationality became all the rage for a couple of centuries and, yes, there were those who wanted to oppose it. 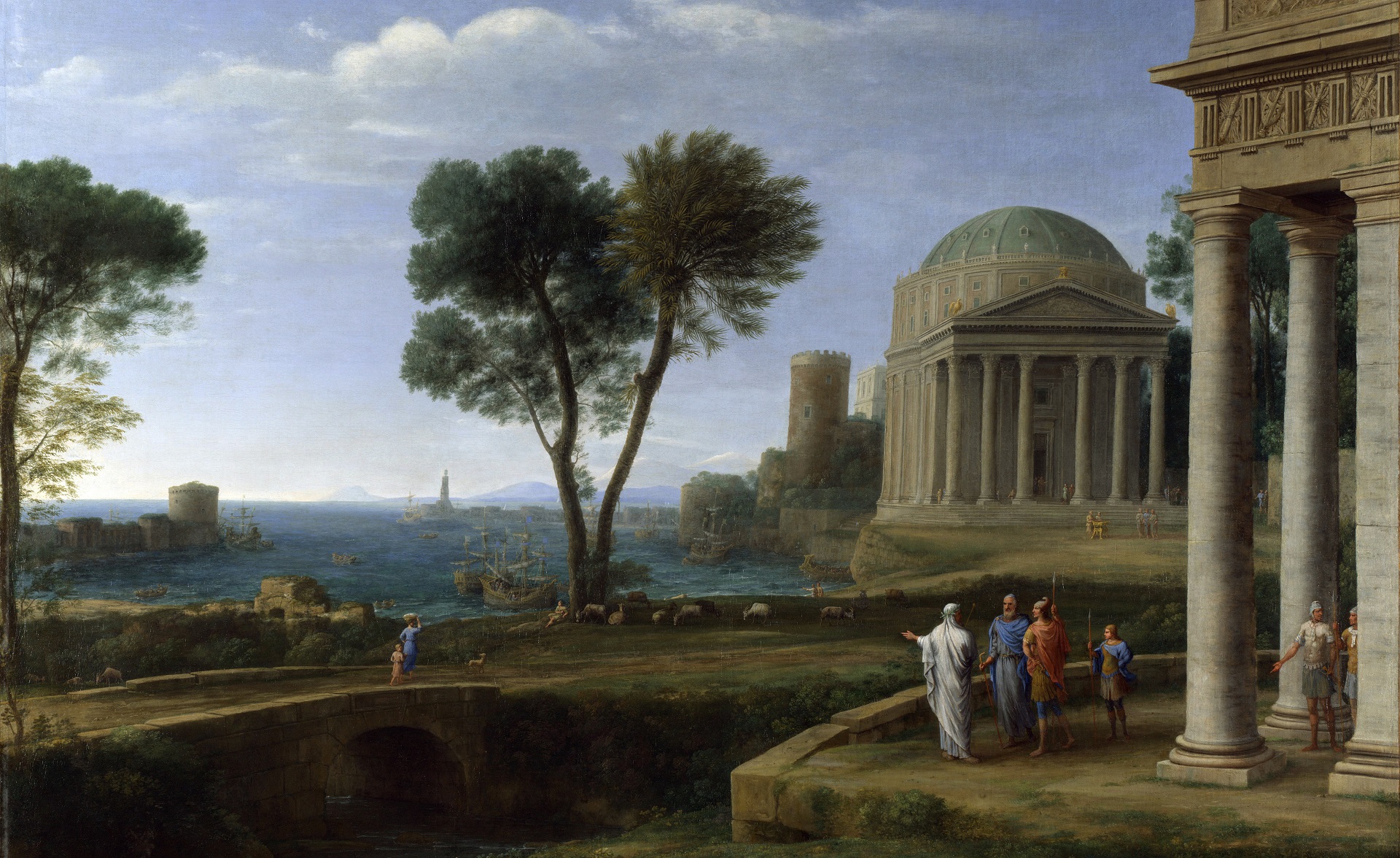 The Pre-Raphaelites (The Pre-Raphaelite Brotherhood) initiated their creative endeavors in the middle of the XIX century, a few decades before the Impressionists showed up. So, no wonder that representatives of both groups knew each other and some influence of the former certainly took place. The Pre-Raphaelites named themselves after Raffaello Santi, the most academic Renaissance painter, in their view. At a time young, educated and amateur artists led by William Holman Hunt, John Everett Millais and their friend Dante Gabriel Rossetti rebelled against the teachings of Royal Academy, proclaiming the purity, sincerity and beauty of the Renaissance ideals. Yes, the Pre-Raphaelites came back to art of the Late Middle Ages (another link here), however, the distinction between predecessors’ and adherents’ manner is evident. The XIX-century artists weren’t ashamed of unleashing colour, placing even more emphasis on the close link between humans and nature. The Pre-Raphaelites maintained focus on details and symbology, painting from life to enhance the plausibility of the image. The nice thing is, the Pre-Raphaelites failed to revolutionize art, though their brushstroke puzzled the contemporaries, whereas the Impressionists stopped the art history to start it again (and it’s not too much to say so). Indeed, the The Pre-Raphaelites added expression and their own artistic vision into painting, abiding by the rules of composition and accepted painting technique, while the Impressionists stepped further. Uncompromisingly, they lost all their senses and stepped back from the very foundation, thus making revolution identified by the predecessors. Although most Impressionists’ paintings mainly focus on the beauty of nature, merely supplemented by human presence, the influence of the Pre-Raphaelites here is easy to guess. For instance, the mentioned above  ‘Symphony in White’ by James Abbott McNeill Whistler was seen by the audience as a sheer extension of the Pre-Raphaelites art while being exhibited at the Salon des Refusés in 1863.

However, the artistic impact of the Pre-Raphaelites didn’t end there, but threw its beams all the way to the 20th century. The decorative function of art was implied by the adherents of the Renaissance, just think of the ornaments at characters’ gowns and lush interiors in the background of paintings. The upcoming Art Deco and Art Nouveau styles at fin de siècle were definitely inspired by this motif, so were Kitsch and even Pop Art in the 1960s… Well, that’s another story altogether which might be revealed in a separate article.