Every month of the year grants us new opportunities, including, but not limited to, the career ones (just look what we found). Watching an inspiring film about fashion, seeing a worthy exhibition, or flipping through a book, which is not quite a book, but a documentation of the artist’s heritage. Whatever you look for, don’t miss your opp!

Artwork Archive is a web based program for artists, galleries, and collectors to present, sell, and buy art. Each month the website comes up with some new opportunities for creatives, a substantial part of which, however, targets US artists (since it’s a Denver-based initiative). Still there is a great variety of other opps on the list this August. For instance, the Magazine for Contemporary Art seeks works by visual artists worldwide to include in the upcoming online publication. ‘Curiocity’ Brisbane (Australia) calls upon all creators, engineers and architects included, to reflect upon the intersection of art, science, and technology, while J. Mane online gallery wants artists to share their vision of food and eating. Deadlines for submissions vary from early August till late September, 2020 — anyway, there is not much time left. And don’t forget about the Complete Guide to 2020 Artist Opportunities — a careful weekly newsletter by Artwork Archive, offered for free.

Another representation of works by the famous Japanese artist Yayoi Kusama is postponed: planned for September 2020 at the Berlin Gropius Bau, the retrospective will presumably take place in March 2021. Exhibitions by Kusama at the New York Botanical Garden and Tate Modern in London were also moved because of the pandemic. When the major retrospective finally takes place, viewers will get a chance to see the entire artistic heritage by the 91-year-old Yayoi Kusama created throughout her career. After Gropius Bau the exhibition is set to visit the venues of the Museum Ludwig in Cologne and the Fondation Beyeler in Riehen, Switzerland. The 91-year-old Yayoi Kusama is one of the top-selling female artists in the global art market today, widely recognized for the obsessively repetitive patterns in her works (polka dots is the most encountered one). However, it wasn’t always like that. The Japanese artist took a hard road to reach fame in her older age. Having grown up a highly anxious person (Kusama is reported to have had her first hallucinations as a child and generally being traumatized in this age), she moved to New York to continue studying art. Though being friends with Donald Judd, Dan Flavin, and other promising artists, who were to become famous in NY very soon, Kusama had it tough promoting and selling her artworks in US. Her first decent show of Infinity Net paintings took place in 1959. Later for about a decade she participated in group exhibitions in Europe, not enjoying popularity overseas. It’s the 1966 Venice Biennale, where Kusama presented her work Narcissus Garden, that made the artist attractive for the American art world. As for her homeland Japan, it was only in the 1980s that she gained recognition there. Yayoi Kusama art is both captivating and repulsive: finding oneself at one of her Infinity Mirror Rooms filled with numerous objects designed the same way, one can’t but starts thinking of the artist’s destiny, genius, and the pain she had to go through.

Documentary about Martin Margiela to be available online soon

The film Martin Margiela: In His Own Words released in April 2020 will appear in online cinema on August 14. A documentary throws some light on the enigmatic figure of Margiela, one of the greatest yet anonymous couturiers of the world. The Belgian fashion designer hardly ever wanted to open up before the film director Reiner Holzemer talked him into a few confessions. Along with shots of Margiela’s sketches and his personal belongings, the film features comments made by some other stars of the fashion industry, like designer Jean Paul Gaultier and critic Cathy Horyn. Martin Margiela himself will show up in the frame, too.

P.S. While waiting for the online premiere until the mid August, enjoy the official trailer of the film https://hypebeast.com/2020/4/martin-margiela-in-his-own-words-trailer

So, Martin Margiela is like Banksy for the world of fashion, still what is he famous for apart from that? The Belgian designer is considered one of the pioneers of deconstruction and sustainable approach to clothing, while the collections by Maison Martin Margiela have shaken the world by their careless innovativeness. After having graduated from the prestigious Royal Academy of Fine Arts Antwerp in 1980, he started off as a design assistant to Jean Paul Gaultier, before setting his own brand in 1988. Highly successful at the turn of the century, Margiela left his own company in 2009, claiming he was tired of pressure and a bit run out of inspiration. Margiela has never enjoyed having direct communication with journalists, that’s why he remained personally known in small circles only for a long time. The new movie might suggest another explanation for the phenomenon of Martin Margiela, but one thing for sure: the designer knew how to turn trash into treasure and wasn’t afraid of looking bizarre. A new series of monumental works by Anselm Kiefer have been put on show at Galerie Thaddaeus Ropac Salzburg until October 3. In this series the artist refers to the famous German poet and singer of the classical period of Minnesang, namely Walther von der Vogelweide (c. 1170 – c. 1230). In his new pictures painted in the south of France, Kiefer sings the beauty of nature, just like Vogelweide described the enchantment of a romantic meeting in his poems. In the new series Anselm Kiefer gives a particular focus to the figures of Grim Reaper, Eros, and Thanatos.

The art by German painter and sculptor Anselm Kiefer (b. 1945) (b. 1945) can be defined as neo-expressionism. Using different materials, such as straw, ash, clay, lead, and shellac, Kiefer explores the issue of cultural and collective memory, reflecting a lot upon Germany’s post-war identity and history. In his works the artist makes various allusions to literature, philosophy, and religion, which fits well with Kiefer’s background: before studying arts, he learnt law and Romance languages. Paintings and sculptures by Anselm Kiefer are exhibited worldwide. The new hardcover book has a long title, which sounds like Banksy: You Are An Acceptable Level of Threat and if You Were Not You Would Know About. It has 248 pages that highlight works by the famous street artist: from his early graffiti from the late 1990s till the objects created in the recent 2018. The fresh edition serves both as a chronicle and documentation of Banksy’s artistic career. So, as a reader, you can not only enjoy high-quality illustrations of the artist’s works, but also extensive descriptions, which explain the context of his oeuvre. The book has been released online and is already available for purchasing 🙂 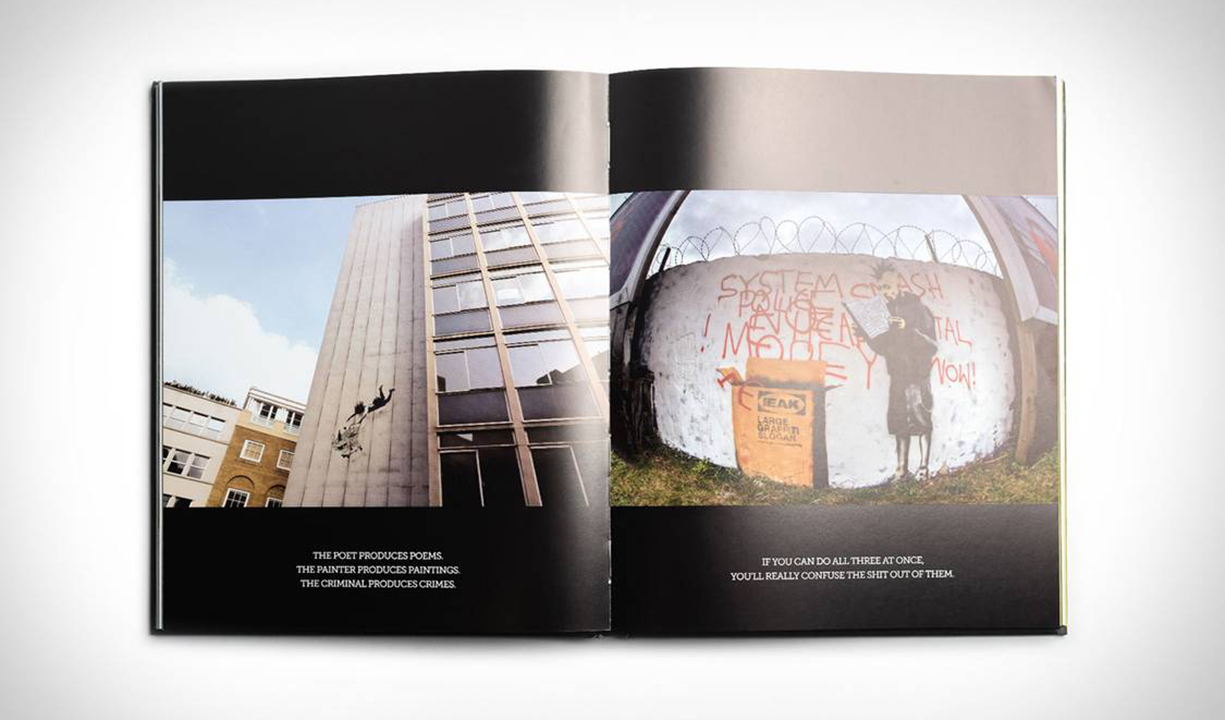