Andy Warhol is everywhere: on the screens (coming soon) and yet in the halls of Tate. Wong Kar Wai is tasting new waters not leaving his beloved Shanghai, while Virgil Abloh as usual doesn’t find it difficult to surprise the audience. Scroll down to learn more about the interesting news of the week.

The biographical film is titled Warhol and based on the so-called book by Victor Bockris. The producer is Terence Winter, the screenwriter of the famous The Wolf of Wall Street. Back in 2016, the actor was already rumored to be starring in the film about the king of pop art. Recently Leto has paid a surprise to his fans by confirming the information on Instagram:

‘Yes it’s true I will be playing Andy Warhol in an upcoming film. And so grateful and excited about the opportunity. Happy belated birthday Andy. We miss you and your genius.’

Andy Warhol would have turned 92 on August 6 (Leto’s post was published one day after that). The celebrated American artist died at the age of 58 from a sudden irregular heartbeat in his sleep, recovering from a gallbladder surgery. Prior to that he had already been close to losing his life, when writer and radical feminist Valerie Solanas tried shooting the artist in his own studio in 1968. Coming from a poor family of Americanized Slovak migrants, Warhol (born Andrew Warhola) started out as a commercial illustrator. Having realized it wasn’t the way to take over the art world, Andy Warhol resorted to the winning strategy: he decided to give people what they wanted by creating images of celebrities, money, and fast foods in large quantities. Warhol is famous for using silkscreen a lot and believed to be one of the pioneers of video art. His Factory where both social life took place (a major celebrities hangout) and films were screened became a phenomenon of the American art world. Probably, the most recognized works by Warhol are his Campbell’s soup cans (1962) and the Marilyn Diptych (1962), the latter created immediately after the death of Monroe. Remember talking about Wong Kar-Wai on the website of Haze Gallery, while discussing the figure of the brilliant photographer Wing Shya? The two collaborated on the movie Happy Together (1997), where Kar-Wai took the direction and Shya documented the production process. This case as many others represents Wong Kar-Wai as an experienced film director, however, it’s time the maestro tried a new role.

Kar-Wai is set to produce a new TV drama project called Blossom Shanghai. Originally thought just as the film Blossoms, the idea has evolved into television series. The series will serve as an adaptation of the short stories novel by Jin Yucheng, featuring the life (and love) adventure of a young opportunist in the gilded city of Shanghai. For Kar-Wai Blossom Shanghai is a perfect chance to confess his love for his hometown as well as to try his hand on television.

The major retrospective of Warhol’s art at Tate Modern was to take place before September 4. Due to the pandemic the exhibition went digital: since the middle of March viewers could enjoy a curator’s tour of the exhibition, exploring it room by room virtually as well as the high-quality images of Andy Warhol’s works. Good news: you still can try all of the online options plus attend the show live until late autumn. The only thing is you should book tickets in advance and comply with precaution measures, more details on this are available on the website.

Tate Modern hasn’t seen such an extended show of Warhol’s works for about 20 years. From his early tender illustrations in pencil till the perimortem works that are rather grotesque and mystical… Let alone the already mentioned images of Monroe, soup cans, and Coca Cola, viewers will discover works never exhibited before in the UK. For instance, Warhol’s  Ladies and Gentlemen series that contains images of mostly black drag queens and trans women hasn’t been on display for a long time and, thus, remains obscure. Still art lovers don’t live by Warhol alone. Tate Modern reopened the exhibition of Steve McQueen’s artworks on Friday, August 07. The art by the winner of the Turner Prize (1999), proclaimed artist and filmmaker McQueen hasn’t been exhibited in his home town London for two decades. 14 major works by Steve McQueen await the viewer at the show at Tate, including film, photography, and sculpture. The exhibition might become a sort of a wrap-up of McQueen’s latest creative period.

‘I remember my first school trip to Tate when I was an impressionable 8-year-old, which was really the moment I gained an understanding that anything is possible. As we all gradually emerge from lockdown, and in some ways begin to see the world anew, I hope visitors experience that same sense of possibility’.
(Steve McQueen)

Among the works on display are Exodus 1992/97, the artist’s first film shot on a Super 8 camera, and the two-part film Caribs’ Leap. Within the latter work Steve McQueen suggests the viewer to split the experience: watching the first part of the film inside the exhibition, and the other one in front of the museum, overlooking the River Thames. There is also a recent work called End Credits (2012–ongoing) where McQueen plays tribute to the actor and civil rights activist Paul Robeson. Virgil Abloh, the artistic director of Louis Vuitton men’s wear department, presented a new SS21 collection on August 06. The presentation took place at the port of Shanghai inspired by the song I’ll Wait For You (Strange Worlds in My Mind) by the American jazz composer Sun Ra. The collection is supposed to be the face of the LV new upcycling program, however, that was the case just for a few garments presented on the runway.

‘Ideas – the very foundation of fashion – are no longer disposable’.
(Virgil Abloh) 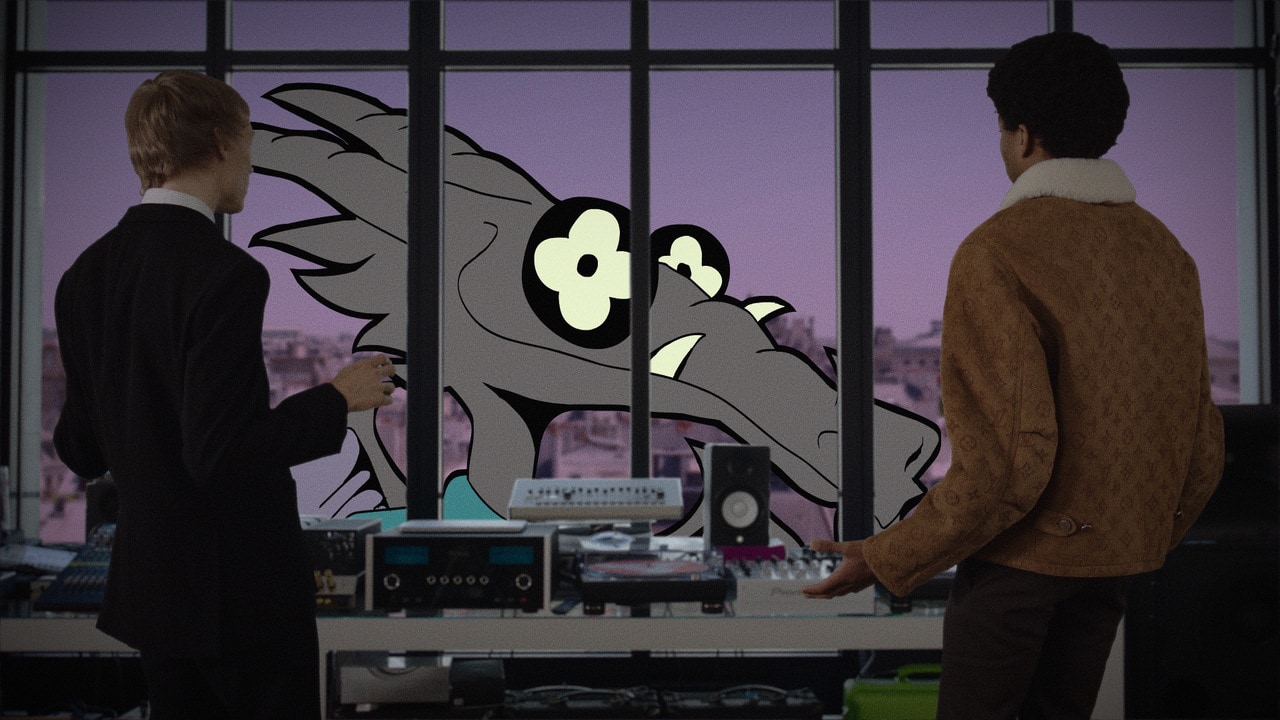 About half of the garments from the collection are made of recyclable materials, while the other half comes from past LV shows. The general mood of SS21 is dreamy: deep cartoony colours, sophisticated patterns, clean lines interrupted by disjoint seams… The SS21 collection by Louis Vuitton is a perfect example of what you call: the devil is in the details. The concept of the collection is available on the brand’s website. 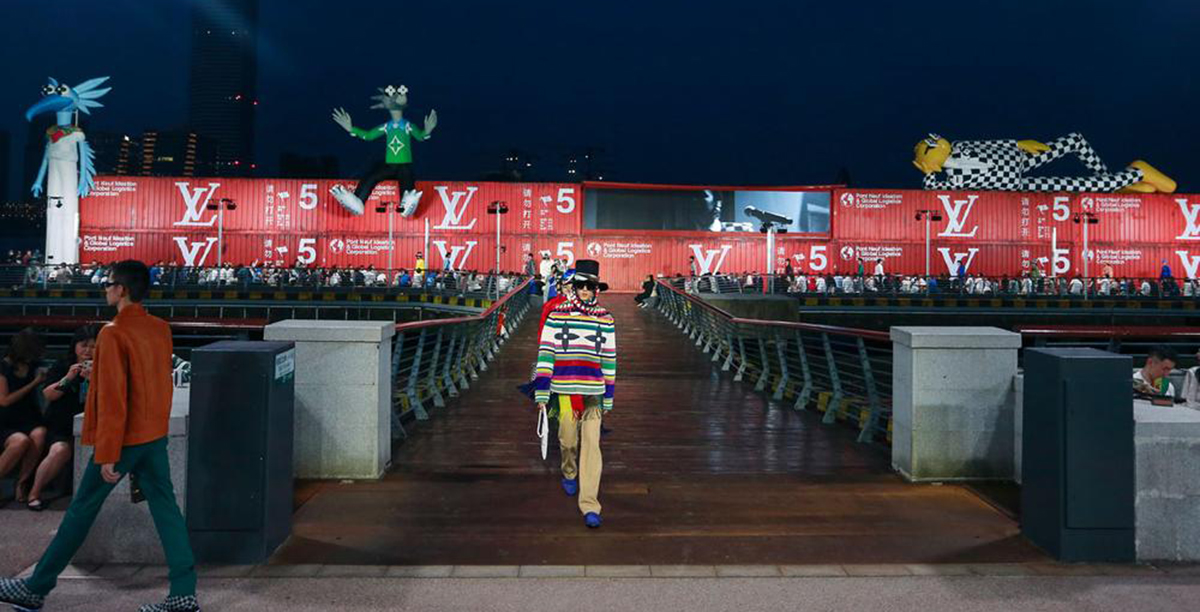